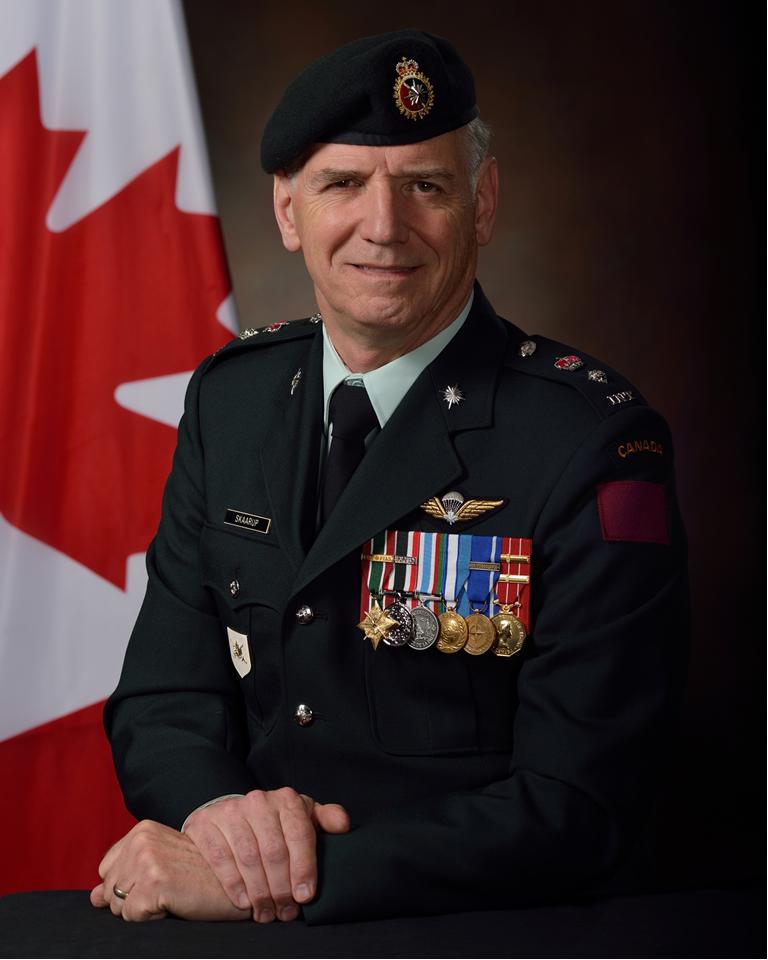 I have been an Army Intelligence Officer for most of my 40 years service in the Canadian Forces from Feb 1971 to Aug 2011.  During my service career I was deployed overseas with Headquarters Canadian Forces Europe (HQ CFE) and later with 4 Canadian Mechanized Brigade Group (4 CMBG) based in Lahr, Germany.  I served three years with the Canadian Forces Parachute Team, the Sky Hawks at Edmonton, and with the Canadian Airborne Regiment at CFB Petawawa, Ontario, including a deployment with the Canadian Contingent of the United Nations Peacekeeping Force in Nicosia, Cyprus (CANCONCYP).  I served with the NATO-led Peace Stabilization Force in Sarajevo, Bosnia-Herzegovina (SFOR), and with North American Aerospace Defence Command (NORAD), as well as United States Space Command (USSPACECOM) and later United Sates Northern Command (USNORTHCOM), based on Cheyenne Mountain in Colorado Springs, Colorado.  I served in Halifax as the Area G2 (Intelligence Officer), and in 2004 deployed with the Canadian Contingent of the Kabul Multi-National Brigade (KMNB) as part of the International Security Assistance Force (ISAF), in Kabul, Afghanistan.  My last posting was with 5 Canadian Division Support Base (5 CDSB) Gagetown, New Brunswick, where I retired from the Army in the rank of Major on 8 August 2011.

On 1 Feb 2015 I was appointed HLCol for 3 Intelligence Company in Halifax for a three year term, and was back in uniform until 1 Feb 2018.

If you need more, you will find it here:

From 1977 to 1979 he was a member of the Canadian Forces Parachute Team (The Sky Hawks) based at the Canadian Airborne Centre (CABC), CFB Edmonton, Alberta.

From 1981 to 1983 he served as the SO3 Intelligence Staff Officer at HQ CF Europe (CFE) in Lahr, Germany, shown here with a Soviet-built T-62 tank, at Hohenfels training centre, Germany.

While on duty in theatre, earned his German Army Parachute wings jumping out of this Sikorsky Sea Stallion with 1 Luftlanddivision, at Calv, Germany, 30 June 1982.

The Author received his Canadian Forces decoration (CD) in Feb1983 as a reserve Captain while serving at CFE in Lahr.

Shortly afterwards, he was sworn into the Canadian Forces Intelligence Branch, Regular Force, as a Second Lieutenant on 19 July 1983, by LCol Robinson, HQ CFE G3.

The Author completed the Basic Intelligence Officer 82A, Course 8301 at CFSIS on 23 Nov 1983, and remained with the school as an Instructor until March 1984, when he was posted to Ottawa, where he served as an Intelligence Analyst until the summer of 1986.

From 1986 to 1989, he served as the Regimental Intelligence Officer for the Canadian Airborne Regiment, which was at that time part of the First Special Service Force (FSSF) based at CFB Petawawa, Ontario.  During his Airborne service he took part in a 7-month United Nations (UN) deployment to Nicosia, Cyprus from August 1986 to February 1987.

He earned his British Parachute Wings while jumping with the Red Devils Parachute Team in Nicosia, Cyprus.

In June 1989 he was posted to the HQ and Signals Squadron, 4 Canadian Mechanized Brigade Group (4 CMBG) based in Lahr, Germany, where he served three years as the G2 Operations Officer, spending a great deal of time in an M577 Command Post Carrier.

In June 1989 he was posted to the HQ and Signals Squadron, 4 Canadian Mechanized Brigade Group (4 CMBG) based in Lahr, Germany, where he served three years as the G2 Operations Officer, spending a great deal of time in an M577 Command Post Carrier.

4 CMBG HQ and Signals Squadron Officers and Senior NCOs, Lahr, Germany, January 1992.  Present in the photo are (Left to Right):

On his return to Canada he served as an Instructor at the Canadian Forces School of Intelligence and Security (CFSIS) at CFB Borden, Ontario and two years later as the Intelligence Directing Staff Officer and Base G2 at the Tactics School, part of the Combat Training Centre (CTC), at CFB Gagetown, New Brunswick.  In May 1997, he earned his Master’s degree in War Studies with the Royal Military College of Canada (RMC) in Kingston, Ontario.

From 23 June to 30 December 1997, Major Skaarup served as the Commanding Officer (CO) of the Canadian National Intelligence Centre (CANIC) with the NATO-led Peace Stabilization Force (SFOR) in Sarajevo, Bosnia-Herzegovina.

Following a year-long Technical Science Course at RMC, he was posted to the J2 Exercise Section at North American Aerospace Defence Command (NORAD) HQ in Colorado Springs, Colorado from 1999 to 2003.  He was on duty in Cheyenne Mountain when the 9 Sep 2001 terrorist attacks took place.  On his return to Canada in 2003, he served with the Land Forces Atlantic Area (LFAA) in Halifax, Nova Scotia as the area G2.

From January to July 2004, he was the Deputy G2 and Chief of Intelligence Assessments on the staff of the Kabul Multinational Brigade (KMNB), as part of the International Security Assistance Force (ISAF), in Kabul, Afghanistan.  In 2006 he was posted to 3 Area Support Group (3ASG), CFB Gagetown, where he served as the Deputy G3 Operations until his retirement on 8 August 2011.

Hal is married to Faye and they have two sons, Jonathan and Sean.  Jonathan and his wife Jocelyn have added grandson Cole and granddaughter Ashley to our family.  Sean and his wife Mélyse have added granddaughters Owen and Auli to our family.  Hal and Faye live in Fredericton, New Brunswick, where he continues to write military history and works as a volunteer docent at the New Brunswick Military History Museum at 5 Canadian Division Support Base Gagetown, and as a member of the Board of Directors for the Fredericton Region Museum.

In December 2014 Hal was appointed by Canada's Minister of National Defence as the Honorary Lieutenant-Colonel of 3 Intelligence Company, based in Halifax for a three year period beginning on 1 February 2015 and ending on 1 Feb 2018.

Now retired, I am the very proud grandfather of grandsons Cole and Bauer, and granddaughters Ashley, Owen and Auli (shown here laughing at grandpa), thanks to my wife Faye, our sons and their wives, Jonathan and Jocelyn in Attleboro, Massachusetts, and Sean and Melyse living in Ottawa.